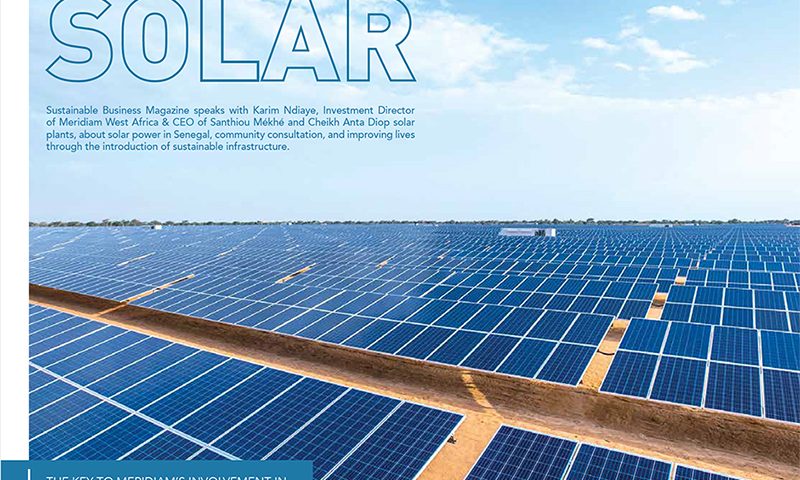 Meridiam is a Paris-based investment and asset management company. Founded in 2005 by Thierry Déau with the belief that the alignment of interests between the public and private sectors is possible and can help answer the lasting social needs of communities, Meridiam specialises in the development, financing, and management of sustainable public infrastructure projects which improve the quality of people’s lives. With offices in Paris, New York, Istanbul, Toronto, Dakar, Luxembourg, Addis Ababa, and Vienna, Meridiam has invested in a total of 60 projects around the world, and manages €6.2 billion of assets, mainly in Europe, North America, and Africa.

Meridiam’s African Fund launched in 2014. “The fund was created to sustain longterm investments in infrastructure for the African continent, so as to accompany and foster growth,” explains Karim Ndiaye, Investment Director of Meridiam West Africa & CEO of Santhiou Mékhé and Cheikh Anta Diop solar plants. “Coming to Senegal was a key part of our regional strategy. The country was stable politically, had interesting growth rates, and had a very optimistic energy plan aiming to diversify the source of energy production by having more that 20% of the production source coming from renewables by the end of 2017. Two years ago, we opened a local office in Dakar, to better understand the dynamics of the renewable markets here, and to see how we could play our part.”

Meridiam’s major projects in Senegal are two large solar photovoltaic plants. “The plants are within 15km of each other,” says Mr. Ndiaye. “The first was the Santhiou Mékhé Project, in partnership with Senergy SUARL, the initial promoter, and the Senegalese Sovereign Fund (FONSIS), inaugurated by the Senegalese President. That is a photovoltaic power plant producing 30 megawatts. The second solar plant, the Cheikh Anta Diop plant, developed with Eiffage and FONSIS, also produces 30 megawatts. Both are now in operation sending power to the grid, the first since last July and the second since last December.”

The main contractor at the Cheikh Anta Diop Plant, RMT GmbH, provided further information on the project. “Senegal’s new Cheikh Anta Diop solar power station was inaugurated on January 16, 2018 in the presence of Senegalese Prime Minister Mahammed Boun Abdallah Dione and local authorities,” says Dominique Pfleger-Hasenfratz, Project Manager for the Cheikh Anta Diop Plant at RMT GmbH. “RMT, leader of a consortium composed of Eiffage Senegal and RMT Senegal, completed this project in one year after contract signature in December 2016. With a capacity of 30MWp, the plant can meet the annual consumption of200,000 people. RMT will also operate and maintain it for the duration of the concession, which is 25 years. This new success confirms the RMT position in renewable energies, after the delivery of the photovoltaic plants of Cestas in France with a power of 300MWp, and Nouakchott in Mauritania with a power of 50MWp.”

The key to Meridiam’s involvement in these two large-scale projects was that the Senegalese government had a clear energy production plan aligned with the new Emerging Senegal Plan, which intends to accelerate Senegal’s progress towards emerging market status by 2035. “We need these kinds of commitments from the state in terms of the regulations and structures in place,” says Mr. Ndiaye. “These are long-term projects including very long development phases – sometimes one or two years. They also require a lot of money, so we need to be crystal clear about the country’s priorities. Senegal had a clear energy production plan, with a target of diversifying their production and 20% of electricity coming from renewables, so we thought we could come down and play a role.”

Meridiam’s first step was to develop a presence in Senegal. “We needed a network on the ground to make sure things were getting done properly, otherwise it was going to take a very long time,” says Mr. Ndiaye.

“The key to the success of the projects was a strong local presence, clear and trusting relationships with the stakeholders, and effective management of the local population. Ultimately, this is an ongoing job, and we’re going to live with these guys for 25 years minimum, so we must make sure we look after them. We provide equity capital for the development phase, structure the projects, select the contractors, monitor and manage the projects with our own staff during their lifetimes. This is a key differentiator for us.”

Only a few years ago, almost all the grid electricity in Senegal was being generated by diesel oil. “There were power cuts almost 30 days per year, versus 3 days per year now” says Mr. Ndiaye. “When you consider that Senegal is not yet oil-producing, and at that time the oil price was very high – more than $100 a barrel – you can imagine the kind of issues Senegal had. We had old power plants and very few natural resources. Every year, the demand for power was going up by approximately 8%, and to fill the gap the Senegalese government was even renting some temporary power plants.

” With the Santhiou Mékhé plant and the Cheikh Anta Diop plant, the Senegalese government has reduced carbon emissions by 60,000 tons of CO2 per year, increased the supply of affordable, reliable electricity to the population, and reduced the frequency of power cuts. “Senegal has less power cuts, and the production costs of these solar plants are competitive compared to turning to diesel oil, even with the price of oil being half what it was a few years back,” says Mr. Ndiaye. “There’s also less pollution, and last year the government reduced the price of electricity by 10%. These are all great benefits to the population. Added to that is the fact that these benefits should help the country become more industrialized, because cheap, clean, and reliable power will encourage investment, which in turn means increased employment and has a positive impact on the economy.”

Meridiam’s motto is ‘investing for the community’. “That motto sets the tone for our whole strategy,” says Mr. Ndiaye. “We want to make wise investments that impact people’s lives though infrastructure. That being said, the environmental, social, and governance (ESG) aspects are very important for us, and also for our investors. The investors putting money into our funds – pension funds, insurance companies, and development banks – want to positively impact the maximum number of people. That’s why, through our investment committee, we carefully select the kind of projects that we’re involved in based on ESG considerations, no matter what the return is.

” Meridiam has a Paris-based ESG Director who liaises directly with investing partners. “Alongside this, our investors conduct regular audits through independent consultant firms,” says Mr. Ndiaye. “They can go to the people affected by the projects and ask questions: ‘What do you know about the projects? Are you involved in meetings?What are your concerns? What kind of social initiatives could help you guys?’ Those audits happen every quarter, and the local population can get involved.”

To ensure a positive ongoing relationship with the local community, Meridiam is involved in several corporate social responsibility (CSR) projects. “We have a very strong, hands-on approach,” says Mr. Ndiaye.

“Every month we visit the local community to do a review and assess their needs, which we then integrate into our local CSR. For example, we have built community centers there in the villages. We have established a supply of electricity to a village that wasn’t on the grid. We have given schoolbooks to more than 500 children. We have introduced a loan initiative for the women, and an entrepreneurship program to give them opportunities to create new businesses. We’ve put together a water drill initiative to help those people whose land is being used for the solar plant to be able to continue farming,with water now available throughout the whole year. We want to make sure the local people don’t just get power, they get their basic needs met too.”

“Today, we’re targeting other renewable projects, not only in Senegal but in West and East Africa, including solar, wind, biomass, and geothermal,” says Mr. Ndiaye. “Our real target, though, is to be a long-term infrastructure investment leader in the region. We also want to become a strategic long-term partner for local communities, offering better access to first-class infrastructure. We don’t compromise because we’re in Senegal; we work to the same standards independently of where we are. We hire major firms for construction and operations, and these firms in turn employ and train local people. So we want a better presence and a bigger impact  while also diversifying our project portfolio and doing more, all to improve the life of millions of Africans.”

“For me as a Senegalese, working for Meridiam and serving and helping local communities is something I’m very proud of,” says Mr. Ndiaye. “Of course, we make money, the loans must be repaid, but what is more important is how we impact people’s lives and provide better opportunities. This is what Meridiam is all about, and this is how we intend to continue working in the future.” 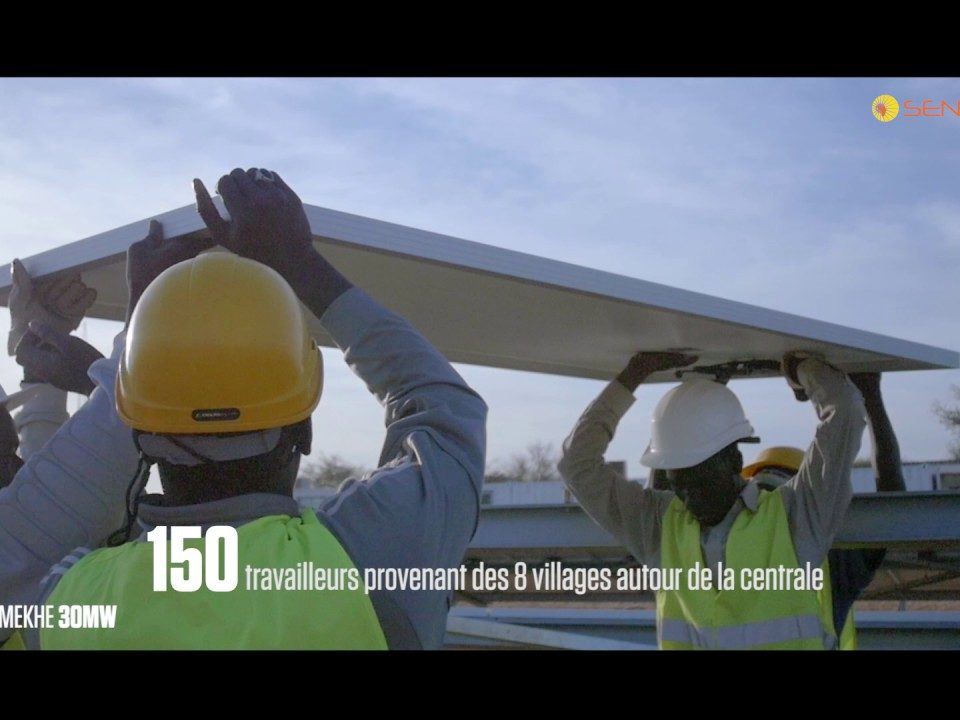 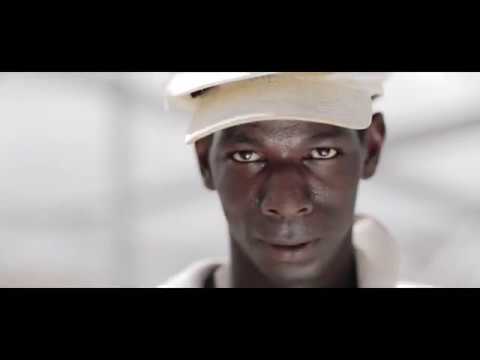